When Facebook offered me to have the notifications turned on for the chrome browser it felt like a cool idea. I did really have fun with it.

But since my PC is shared with my wife things got very confusing when she turned on notifications for her Chrome user. I think it’s a bug in chrome where notification for the inactive users are also shown. When I click on the notification it actually opens a tab from the other chrome user and opens the other user’s Facebook account. This is confusing and also against the main rules of privacy. I guess not even I need to know what’s happening in my wife’s Facebook account.

So here’s the solution I Googled, which is a simple change of settings.

Congratulations! you have no more harassment with Facebook notifications on Google Chrome!

When an ordinary person like me purchases a domain there is a auto-renew option we can enable.  So for example when you buy the domain for two years, at the end of the two years the subscription renews by deducting that from your PayPal or the credit card.

But there seems to be exceptions when it comes to tech giants like Google and Microsoft, Amazing isn’t it.

Here’s a situation in 2011 where Microsoft forgot to renew hotmail.co.uk and the person who has bought it has returned it to them with no charge!

This person has actually bought google.com through Google itself, which is more amazing than the Microsoft situation. Guy who bought the domain being a Google salve again got them out of jail as there were no issues apart from the guy getting barging rights to say that he owned Google for a short period.

So it’s not a bad idea to keep on searching for popular domain names. Who knows you may get lucky. I would suggest that you wont return that for free because you own that domain and it’s their god damn mistake not to protect their domain.

Well I compared the available cloud storage solutions going around and surprisingly I found that Microsoft OneDrive is the optimal solution for someone like me who’s looking for a storage around 200GB to 500GB.

All of them have similar features for a regular user like me and I selected so for me OneDrive looks promising well after the comparison I waned to purchase and when I search for the Microsoft Australia pricing and click purchase I was send to a payment page where the country was selected as USA and I can’t change that. Later after googling I found a link which showed country wise links which had the correct links. I didn’t go ahead with the purchase initially as I wanted to select a plan and then came later to purchase. I forgot where I found the link and a popup came with a Tech Support gentleman and it was an utter waste of money where I ended up searching again and training them about their product.

Customer care gods never are happy with me so I get the chance to share these stories with you.

Update: now they seems to have fixed the flow in their system 🙂 happy that I could be of service to Microsoft

END_OF_DOCUMENT_TOKEN_TO_BE_REPLACED

I started playing ingress some time back and had very few portals and very few playing to give any sort of fight. But not there is a whole bunch playing and I have a lot catch second time around.

END_OF_DOCUMENT_TOKEN_TO_BE_REPLACED

Google seems to be showing the birthday Doodle for anyone who has a birthday 🙂
Following image shows what I got on the 8th of Dec. Obviously they pull it from Google+, but nice!

I just want to see how it looks like when there is a doodle for a specific day and when your birthday also falls on the same date.

There has been another Doodle on the same day which is “Bjørnstjerne Bjørnson´s 180th Birthday“. Don’t know whether this was shown in our region. 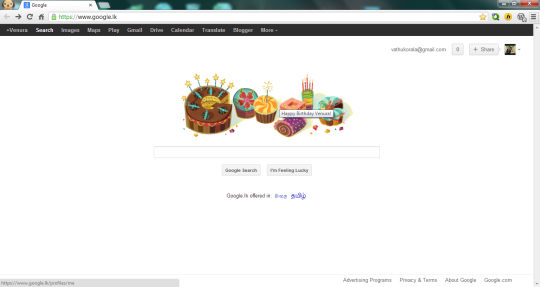